Buddy Rhodes Concrete Products will be closed Monday, May 30th in observance of Memorial Day. Resuming normal operations on Tuesday, May 31st.

The History Of Buddy's Mix 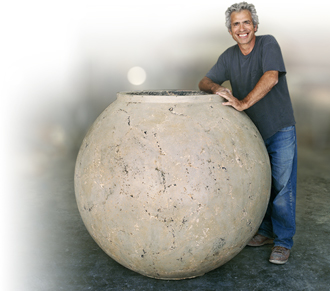 As a young man, Buddy Rhodes was consumed by clay. It was all he could think about, night and day. More important than the material, Buddy was compelled by the creative process. Eventually that creative process pushed his desire beyond the capacity of the material he was creating with. His ideas were too big for a kiln.

Rather than let this limit his ability to create, Buddy struck out to find something different to quench his desire as a maker. Buddy was after a material that would behave like clay, but that could develop strength and durability without the need of a kiln. Buddy was after a self hardening clay.

Buddy found his solution in concrete, but not concrete in the way the world had come to know, a workhorse in the development of modern civilization- cold and utilitarian. Buddy was investigating the material through his own lens, as a moldable and infinite material, and from that process a whole new material came to life. Buddy created a material that behaved like both clay and concrete, and from that moment an evolution began. The mix Buddy created became the benchmark for concrete countertop mixes of the day, and opened up the world of concrete to artisans in an entirely new way. This was Buddy Rhodes Counter Mix, and it has been used by concrete artisans around the world for a great many years now.

Fast forward a few years. Buddy has teamed up with a group of professional artisans at Delta Performance Products, home to BlueConcrete, to make improvements to his original mixes, as well as expand the offering to expand the possibilities in artisan concrete beyond just concrete countertops. The first product that was dissected, investigated, and improved upon was Buddy's original mix. Since the time that the Original Counter Mix was developed, there have been many advances in the world of artisan concrete. Buddy, and the team at BlueConcrete, were responsible for many of those advancements. Buddy and BlueConcrete wanted to see how these advancements could improve the behavior, workability, and overall performance of his Counter Mix, and from this process the Craftsman Mix was born.

The Birth Of A New Concrete Mix

Developing a concrete mix is a complicated and delicate process. Every ingredient plays a role in the outcome of how the mix will behave both in the casting state and in the overall durability of the finished product. The kind of cement that is used, the size and shape of the sand, the admixtures- all of these have to be taken into account to produce a mix that meets the demands of the casting process, as well as the durability of object being created.

We have looked closely at the formulation of the Original Counter Mix and made adjustments to the sand, cement, and admixtures so that we have a mix that behaves in the same way Buddy wanted the mix to act in the first place, while dramatically improving the durability of the concrete in its finished state. The byproduct is a concrete mix that is easy to work with, it can be Pressed in Buddy's Signature Pressed method, it can be troweled with remarkable ease, it can be sculpted and shaped by hand, and it can be made fluid and simply cast. With the advance in fiber reinforcement, this can be cast as thin as 1" thick, reducing the amount of material needed, and reducing the overall weight at the same time.